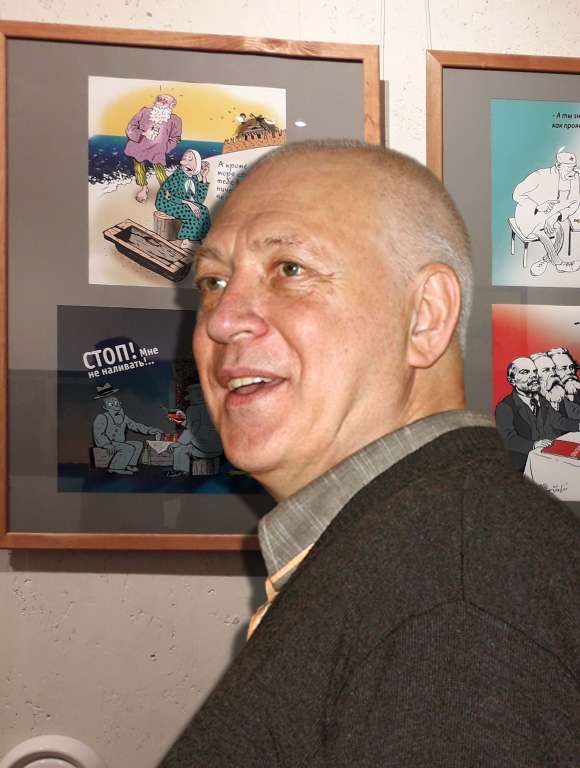 Aleksandre Sergeev did win the 'Prize of the ECC' at last year's Euro-kartoenale 'Chances and Opportunities'.

Aleksandre was born in September 1948, in what was formerly Leningrad (Saint-Petersburg). His mother claims that he started drawing when he was about two years old. Sergeev went to the Academy of Fine Arts in order to paint and then studied at the Moscow Polygraphic Institute.

His whole life he has been illustrating books.And there have been more than 500 of them in the past 40 years. His passion for cartoons started when he was a child.

'I collected them by subject. And gradually I began to draw them myself and showed them to my friends.'

In 1983 he joined the Leningrad Cartoonists Club, where he met Viktor Bogorad, Mikhail Zlatkovsky, Andrei Feldstein and other masters of humour and satire. In 1987 he won his very first cartoon prize in Kruishoutem, where he took home our 'Silver Egg'. This was followed by awards in Italy, Denmark, Turkey, Japan, etc. The number of awards has risen to more than 50 and he keeps on drawing.

'It is difficult to describe my own work', says Sergeev. 'The idea very often arises spontaneously and unexpectedly, through the day and night. Then it is important to remember it so that I can draw it later. Everywhere I go I gather information, an idea pops up in my brain: a simple word, a look, a fragment on TV, an article or a book. I try to create graphics, where no words are needed. It certainly doesn't have to be funny for me. The essence of a cartoon is the idea, the technical execution and of course the aesthetic aspect.'

Sergeev also observes with great interest how art and cartoons are formed in their context. Arises and disappears again ... . 'Cartoons and humorous art are interpreted differently in different countries and by each person, that is a very intriguing concept.'