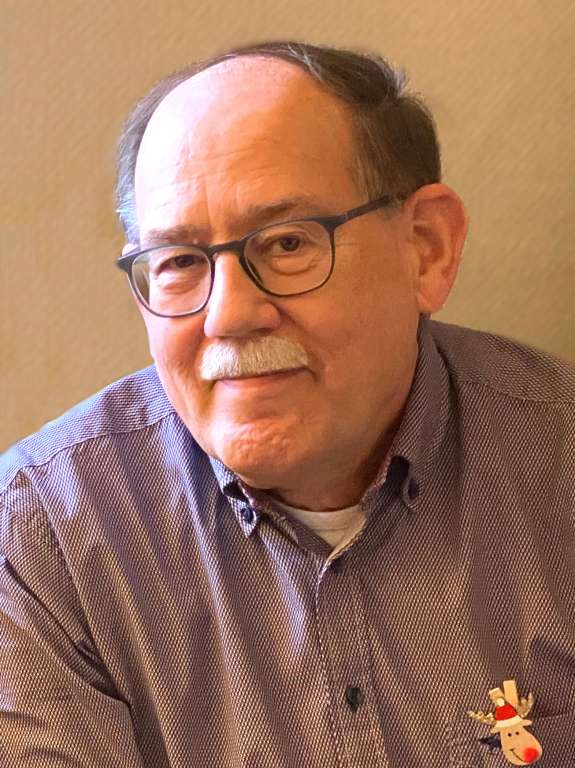 Pol Leurs (PoLeurs) is born in 1947 in the city of Luxembourg and lives as a retired engineer in Gonderange (Luxembourg). He is married and father of three adult boys.

Self-taught in art, his works are regularly published in the Luxembourgish magazines Revue, Forum and Ons Stad from 1975 to 1983. Since 1976 he participated at many national and international exhibitions. He was a jury member at several international cartoon contests and was president of the jury at Salon International de la Caricature et du Cartoon de Vianden (Luxembourg) from 2009 to 2013.

"It is always a great honour for me taking part in a jury of an international cartoon competition, especially if it is as in this case, as president of the jury of the Euro-Kartoenale Kruishoutem 2021. It is also a great pleasure to appreciate the works of the participants of an international contest which gives them the opportunity to prove themselves.

Given the current international coronavirus situation the procedure of selection is unfortunately quite different this year, but that shouldn't be an obstacle for the jury members from doing a good job and getting a good result.

It remains for me to congratulate the famous ECC-team, led by his president Rudy Gheysens, for the organization of a cartoon competition at this high level every two years, and to wish them great success in the future.” 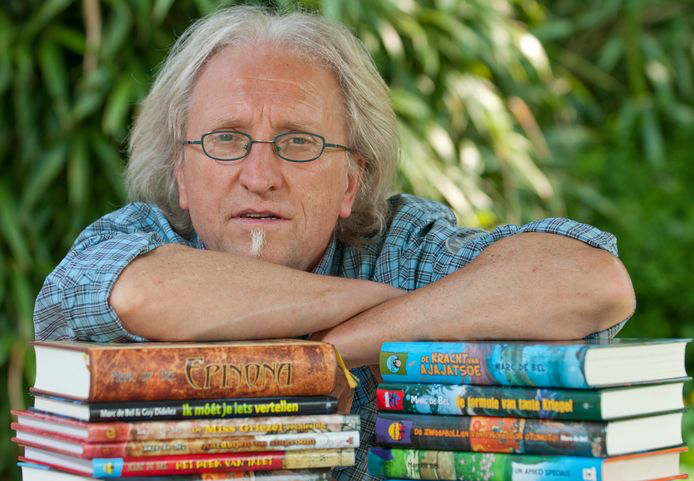 Marc de Bel is the stranger among us. As an honorary citizen of Kruisem (the new municipality named after his books), de Bel is best known as the author of youth and young adult books. But he was also once a cartoonist and even won, a lot of years ago, a modest prize in the Euro-kartoenale Kruishoutem. He has already been a member of the jury.

For Marc, the perfect cartoon has to be funny in the first place, but at the same time it also makes people think and is stylishly drawn or painted. And de Bel is a very critical jury member.

"I am the son of a carpenter, my mother was called Marie, I was born near Nazareth, although my hair is getting grayer and grayer, and less numerous, I still have long hair, I travel to tell stories, let the children come to me and I always disagree with the scribes and the pharisees." 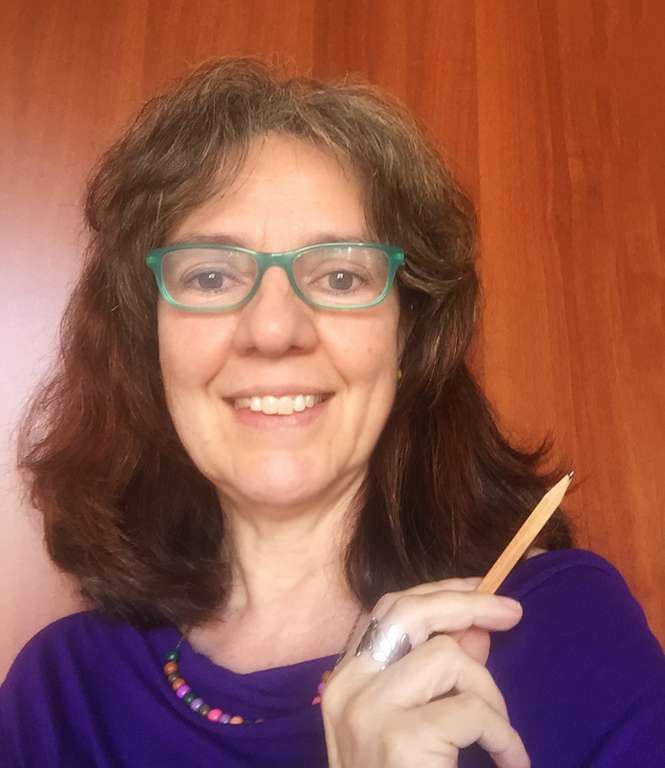 Elena Ospina is a Colombian designer and illustrator. She has worked for many years illustrating editorial projects in America and Europe and has received more than 50 awards for her work in graphic humor. Her cartoons are published in books, newspapers and magazines. She is part of Cartooning for Peace and other cartoonist collectives. In 2017 her cartoon was on the cover of the catalog of the 21th Euro-kartoenale 'The Soul'. And this summer she has a personal exhibition of her cartoons in the ECC.

"It is an honor for me to be part of the jury of this prestigious Euro-kartoenale Kruishoutem 2021 in Belgium, a country with a long tradition in comics and cartoons.

This year, we will see many interpretations on the theme "Chances and opportunities", a very inspiring reality in these times of instability, of adaptation to constant changes and of reflection on our impact on the planet.

Humor is a good way to see the other side of things. It will be a lot of fun to see so many drawings from different parts of the world sharing the good humor in times of crisis." 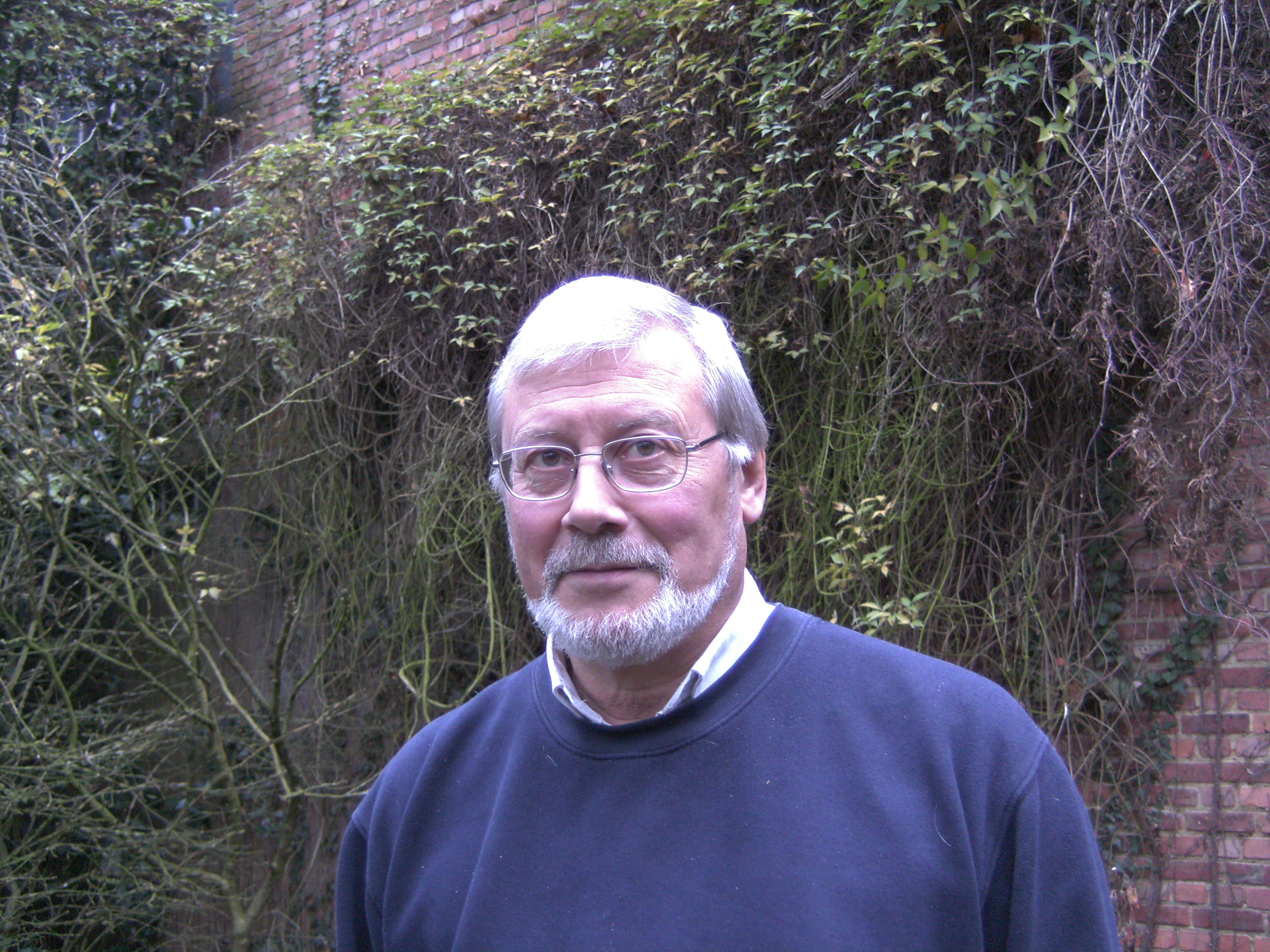 Ronald was in 1986 the initiator and co-founder of the ‘George van Raemdonckkartoenale’ in Boechout (Belgium). He is also chairman of the association International Humour in Art (IHA), an association that deals with humor and art, or better humor in art. The association also takes care of everything related to the artist George van Raemdonck: his paintings, drawings, book illustrations, prints, comics, etc.

He was a jury member in many cartoon contests in Belgium, Poland, Germany and Canada. And as a cartoonist he himself had personal and group exhibitions in Poland, Ukraine, France and Belgium.

He is very curious about the entries in Kruishoutem, because this is one of the better contests where usually many famous cartoonists are participating. It still has to be determined who has the most chances or opportunities. The essence is for him the idea, which is the real soul of the cartoon. And of course, the graphic quality should also be OK. A good black / white cartoon, a line drawing is as much worth to him as the miniature paintings of some.

As a jury member, he describes himself as a quiet spectator to the wonderful world of cartoons. Through his experience, he quickly separated the wheat from the chaff and then it will take a bit longer to determine the order of prices, in consultation with the other judges, of course. He will, however, defend 'his' choice.
"In everything is humor, but sometimes you have to penetrate the soul of things to discover." 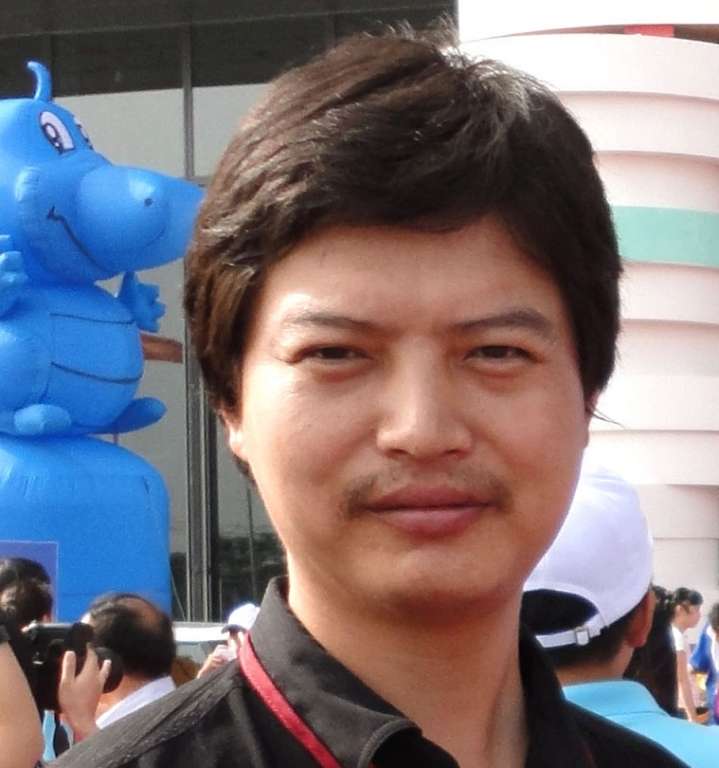 Zhu Cheng is the president of the China Red Man Cartoon Center and secretary-general of FECO China.

Since 1993 more than 6000 of his cartoons and illustrations were published in national newspapers and magazines. His works were exhibited in more than 30 countries and he did win more than 80 prizes.

He was member of the jury in cartoon contests in Azerbaijan, Syria, Croatia, and Serbia. And Zhu himself was the organizer of more than 35 cartoon contests. The purpose of his activities is to build a platform for Chinese cartoonists to communicate with cartoonists from all over the world.

"I express my ideas and emotions with cartoons. I am always keeping thinking in the universe. Cartoon is my best friend to help me to keep thinking.

I am very honored to be the judge of the Euro-kartoenale Kruishoutem. And I really admire the European Cartoon Center, one of the best cartoon museums in the world. We do not have such museum in China. But I am working hard for this and I hope to make China's dream come true as soon as possible!

The art of humor is a barrier-free language of the world. No matter whether your work is humorous, ironic, paradoxical or absurd, it shows the sincerity and friendliness of an artist. The world is a big family. I respect every cartoonist and judge. And I hope to see humorous, innovative, profound and shocking cartoon works!" 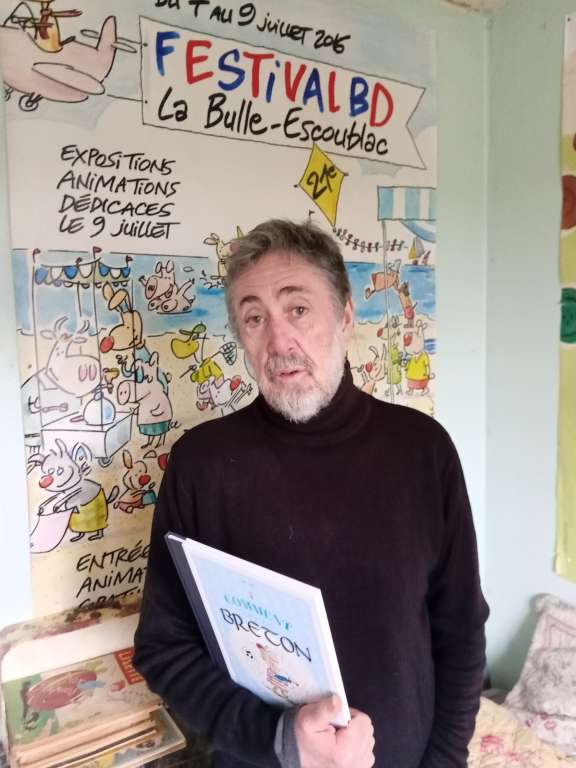 Jean-Loïc Belhomme (Belom) was born in 1950 near Rennes. He was obsessed by the adventures of Mickey and Tintin, before he tried to start drawing himself. He studied at the School of Fine Arts in Rennes before obtaining a University Diploma in Literature and Psychology and a BTS in advertising.

In 1982, encouraged by the publication of his first drawings he gave up advertising to go into comics and cartoons.

In the press, Belom's publications are numerous (Ouest-France, Presse-Océan,  Lui, Pilote ...) and have earned him recognition, in particular by Jacques Glénat, who published ‘Ça occupe’ (1983) and ‘Et que ça saute’ (1984). These are the first two books in a long series that Bélom will sign as a designer and/or screenwriter. He also draws for Spirou, Télérama Junior, Le Point, Le Figaro Littéraire, L'équipe...

Having participated in numerous exhibitions around the world, Belom in 2017 the 2nd Prize in the Euro-kartoenale ‘The Soul’. And in 2019 he did receive the Prize of the ECC in our cartoon contest ‘The Wall’.

"In a cartoon there are basically two things: the gag (the story) and the shape. The marriage of the two must be efficient and harmonious. Obviously this is easier said than done and very often dissatisfaction and doubt are our lot. The next drawing will be better…" 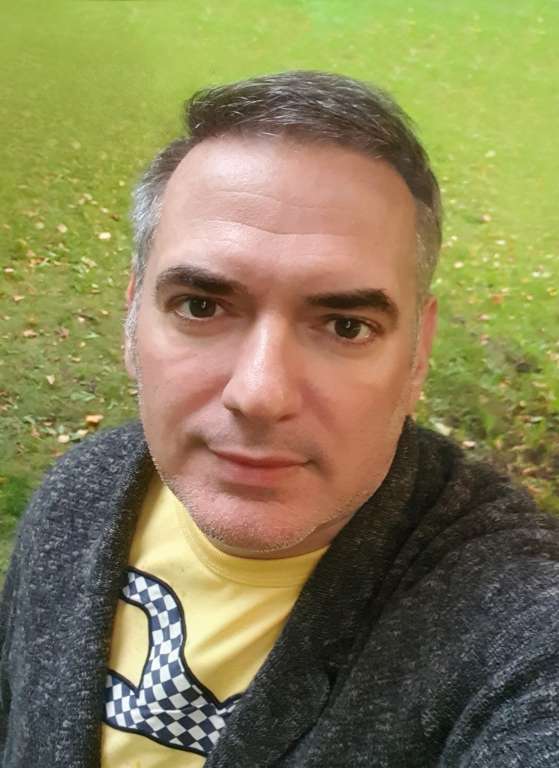 Andrei Popov was born in 1970 in Sint-Petersburg. He belongs to the new generation of satirists: it is hard to pinpoint his artworks as cartoons per se. It is rather a visual parable containing an element of amusing absurdity, or a gag. He believes that it is this absurdity that links his art to caricature, which in turn is not necessarily funny, but at times can be melodramatic or even tragic.

Andrei Popov received no formal artistic training, obtaining a degree in engineering instead.  Probably this is the reason behind his unique ability to observe the reality through a microscope and a telescope alike: scrutinizing the minutest details, he nevertheless manages to see and capture the entire picture.

Works from Andrei Popov’s various series striving towards the same noble goal — to make the world a better place. Apparently, he wants us to pause and take time for reflection, recalling with a smile Stephen Hawking’s words that ‘Life would be tragic if it weren’t funny.’ 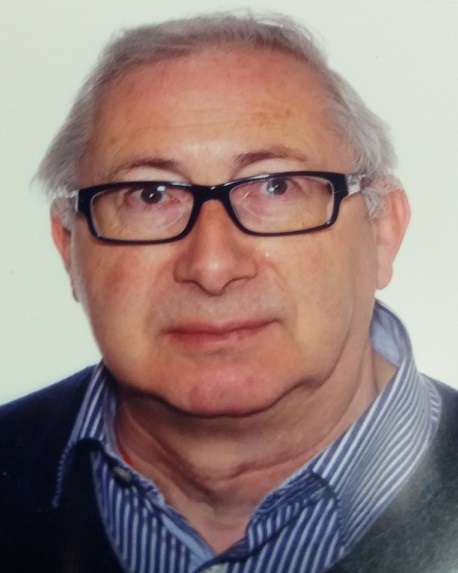 Luc Pareyn is this year the representative of our sponsor Sociumi. He was director of the Willemsfonds, the oldest cultural fund in Flanders and of Liberas, the scientific center for the history of free thinking and acting in Belgium.