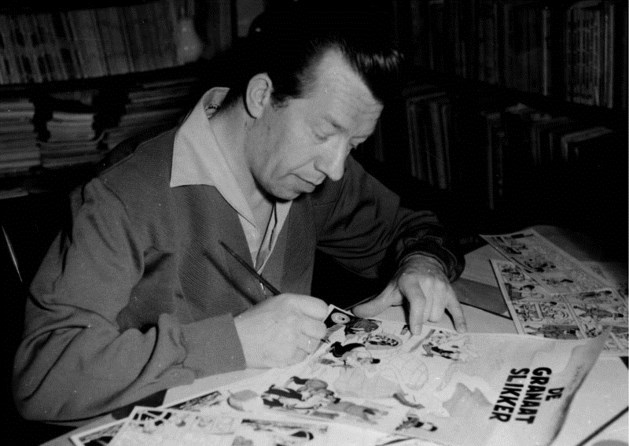 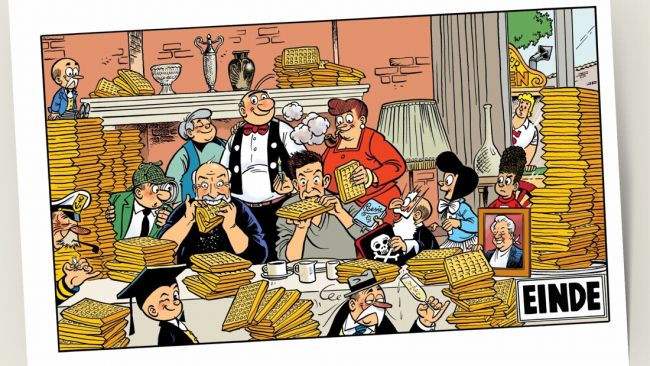 Yesterday the Belgian comic strip author Marc Sleen passed away. The 93 year old Marcel Neels was best known for his series Nero, which he drew from 1947 until 1992.

But he started his career in 1944, at the end of the Second World War, as a polical cartoonists for the Catholic newspaper De Standaard (later: De Nieuwe Standaard and De Nieuwe Gids). Almost every day he had to produce a caricature related to a relevant news topic. He could be seen as a pioneer in press cartooning in Flanders. In the beginning, just after the war, Hitler and Germans are a frequent topic for his cartoons. As he drew for a catholic newspaper the communist party and Stalin were also commonly used subjects in his work.

In 1945 a new Catholic Party (CVP) was born and as cartoonist of De Gids the cartoons and caricatures of Sleen can be seen as propaganda for that new political party. In important political issues of that time as the Koningskwestie (that leaded to the abdication of the King LeopoldIII), the 'Schoolstrijd', ... Sleen took clearly side against the socialist party that gouvernt the country at that time.

Also in the comic strips of Sleen humour and politics can be found. Later, when Sleen is recognized for his great skills as artist his work is less influenced by a specific political orientation and we can see a more independant comic strip author.

A lot of Belgians have great souvenir about reading Nero in their childhood. As every Nero story ended by a family gathering with Belgian Waffles as meal, we could best honour the work and life of Marc Sleen by organising a great 'Waffle Party' !

Thanks for the great cartoons, caricatures and stories!