Since a few years - once a year - the ECC-team travels to an other city to attend the opening ceremony of an international cartoon festival. So in the past you could see us in Vianden (Luxemburg), Marostica (Italy), Berlin (Germany), Legnica (Poland), St. Just (France), The Dutch cartoonfestival (The Netherlands), Porto (Portugal), ... etc.

This year we did choose one of the oldest festivals in the world: Gabrovo in Bulgaria. We have a long tradition of collaboration with the Gabrovo House of Humour and Satire, but we did not meet the new director - Margarita Dorovska - yet. So this was a good reason to travel to Bulgaria.

Our first day we spend in Sofia with Ivailo Tsvetkov and some other cartoonists and on Friday we took the bus to Gabrovo. We were welcomed by the president of the 'Club of Belgian Friends' Mariana Basheva and here husband at the busstation. 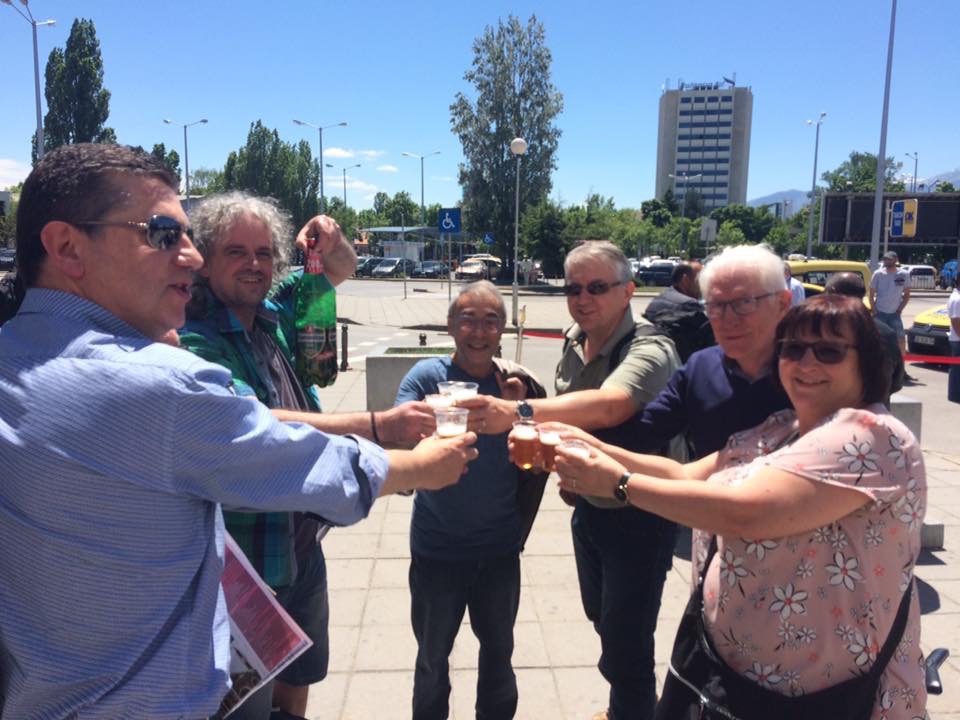 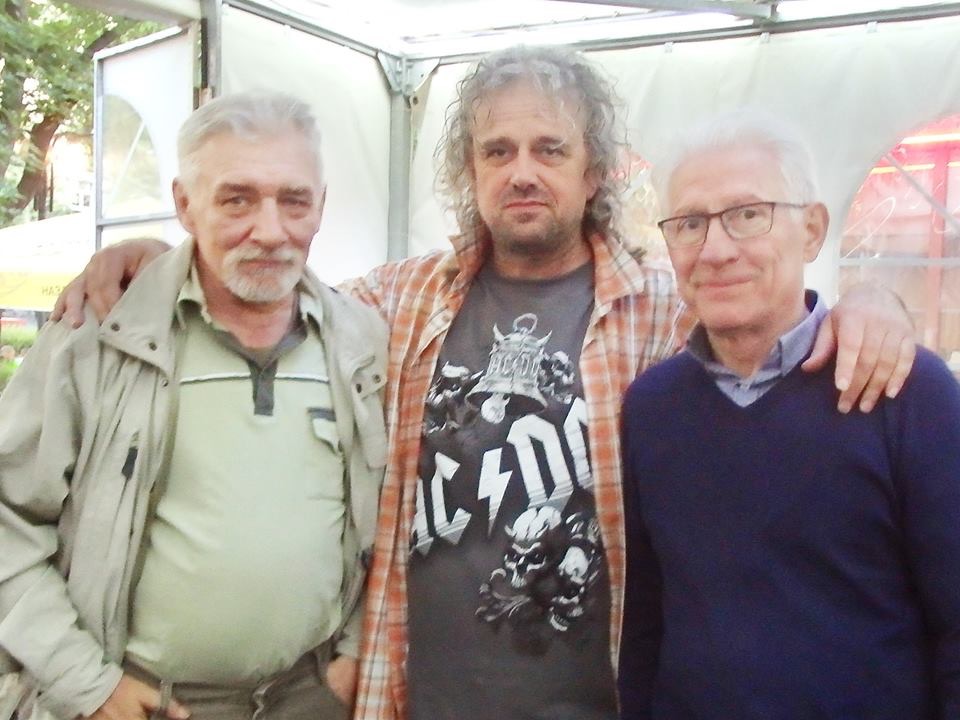 In the evenening we went to the inauguration and after a few minutes we allready saw some friends: Jean-Marie Bertin (France) and Andrei Popov (Russia) were both jury members and it was nice to meet them again. 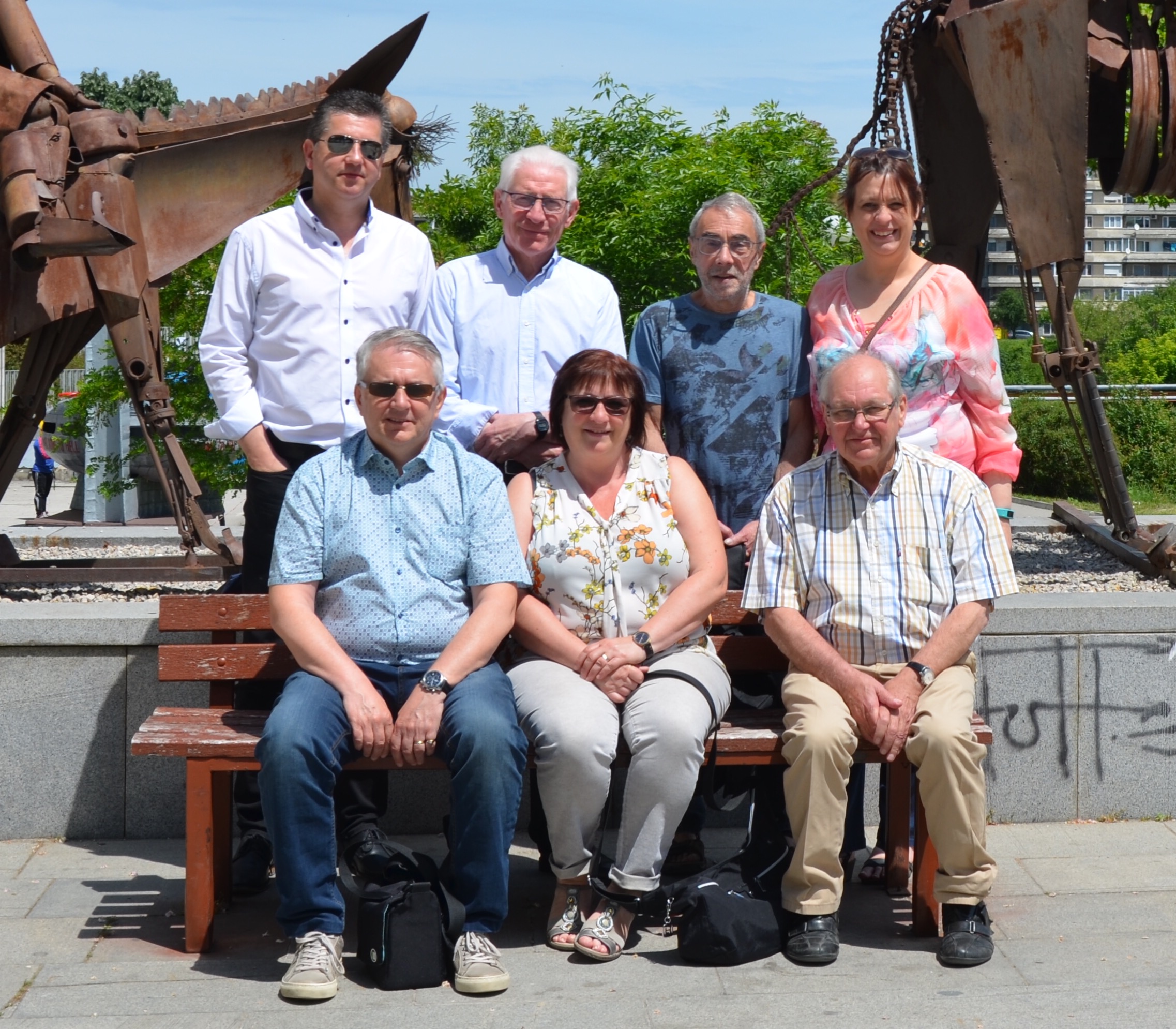 The House of Humour, a museum completly devoted to all forms of laughter, is an amazing building with huges exhibition halls. For the 23th edition of the biennial there were 3 exhibitions. Of course the contest for cartoons, a contest for contemporary art, both about the theme 'Laughing in the face of...'  and a curated exhibition. 749 artists from 71 countries took part in this years edition. Almost half of the artistÑ who sent proposals for the juried exhibition are new to the Biennial.

The fact that the theme is rather broad and the three different exhibitions makes that it is a very diverse exhibition, inspite of the size of the exhibition. We were also very proud to see our Belgian friends: Constantin Sunnerberg, Stefaan Provijn and O-Sekoer among the selected cartoonists.

A lot of people came to the museum for the inauguration. But the speeches were so long - and only in Bulgarian - that only a few (the winners, organisers, jury members and ... the ECC-team) people made it to the end. But we were rewarded for that with drinks and finger food and an after party.

On Saturday we had a meeting with Margarita to exchange experiences and talk about future collaborations. We also had the oportunity to visit the library/archive of the museum. At eleven we attended  some lectures by the jury members and so we learned about French cartooning by Jean-Marie. 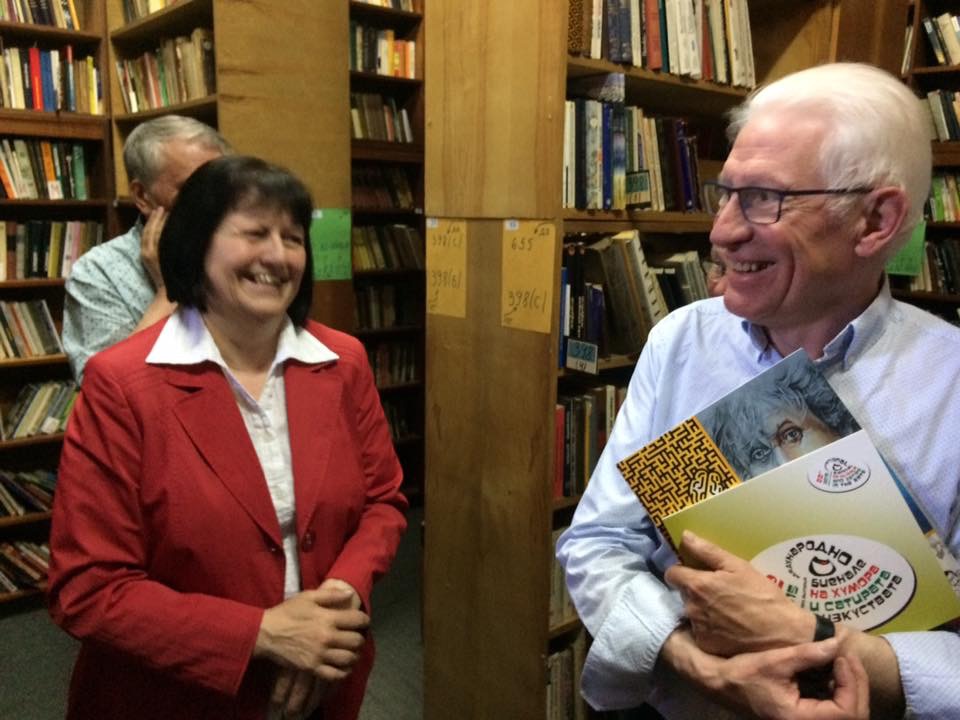 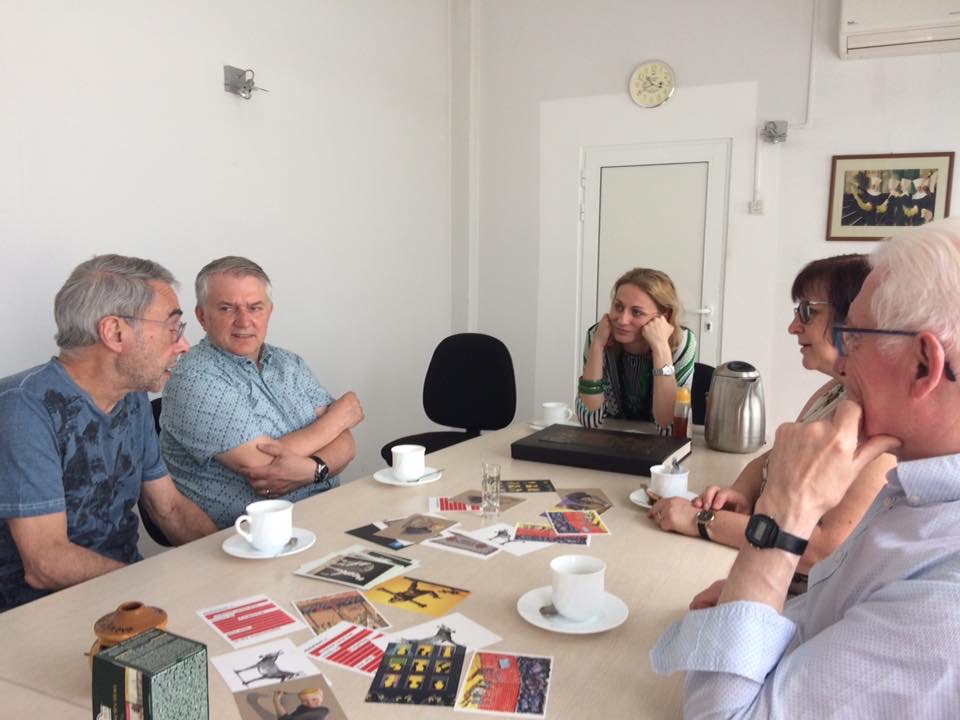 In the late afternoon we did go to the Gabrovo Carneval and so ended our official part of our trip to Bulgaria.

Hope to see you next year on an other festival (suggestions are more than welcome!)

More information about this 23th edition and some works you can find on the website of the House of Humour and Satire. 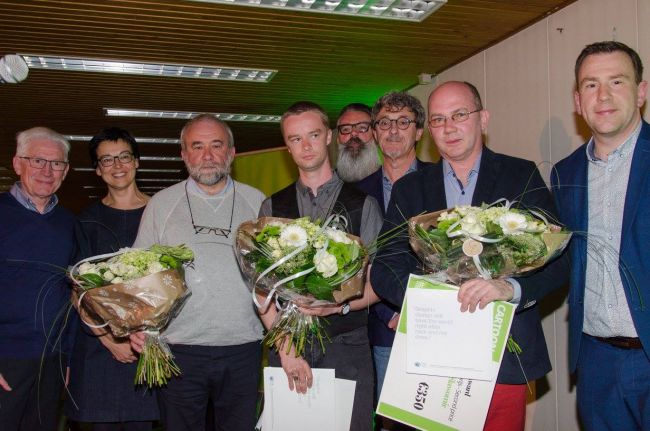 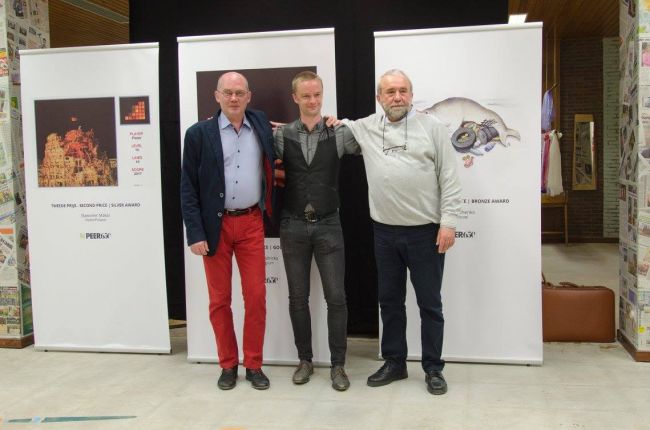 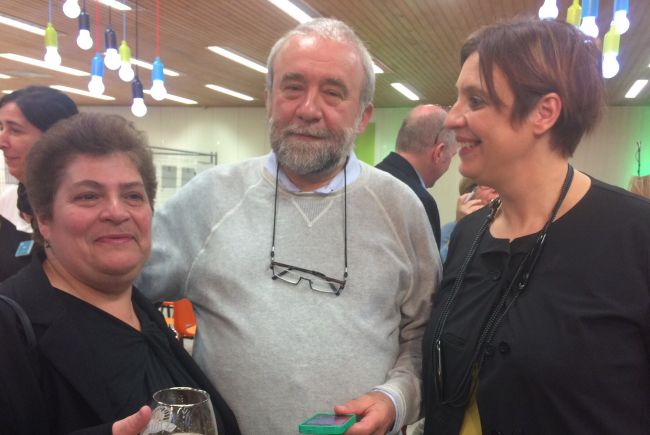 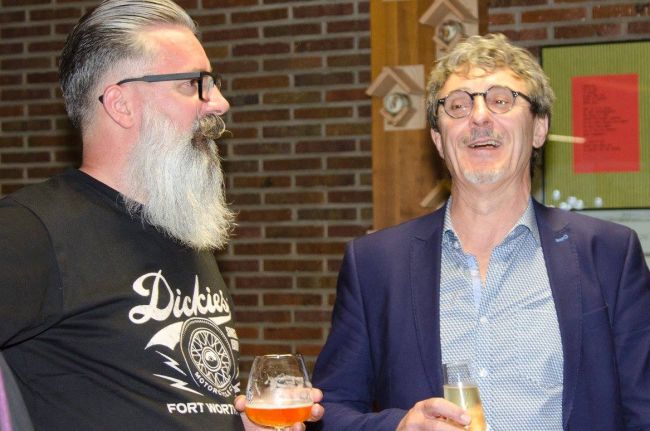 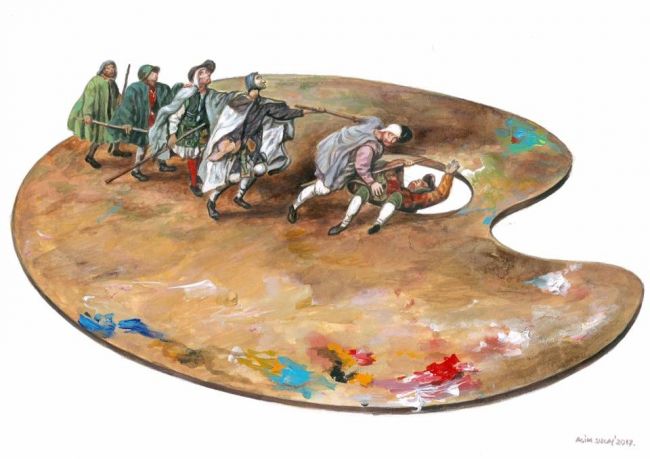 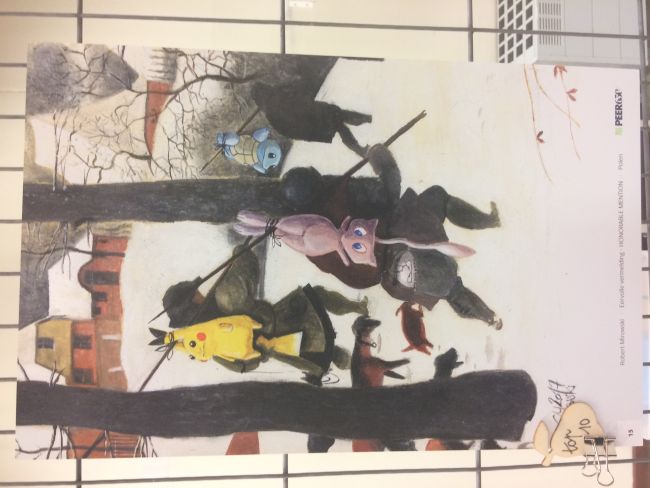 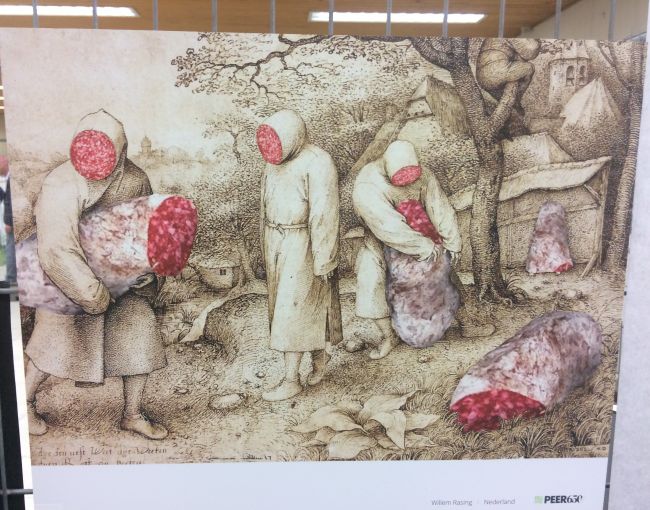 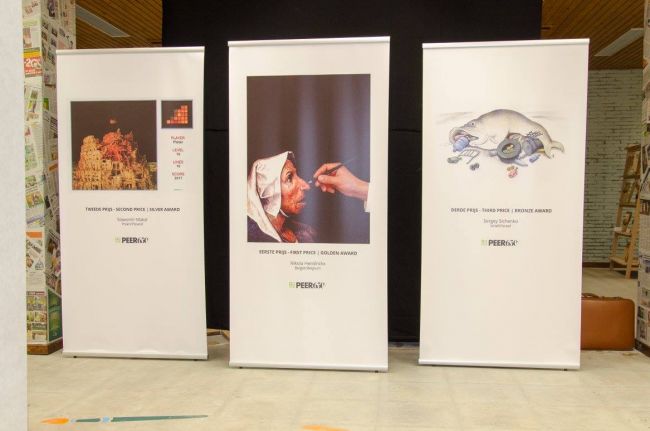 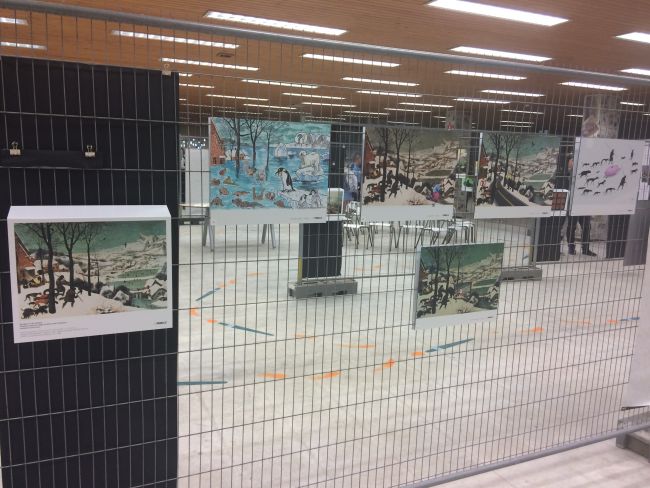 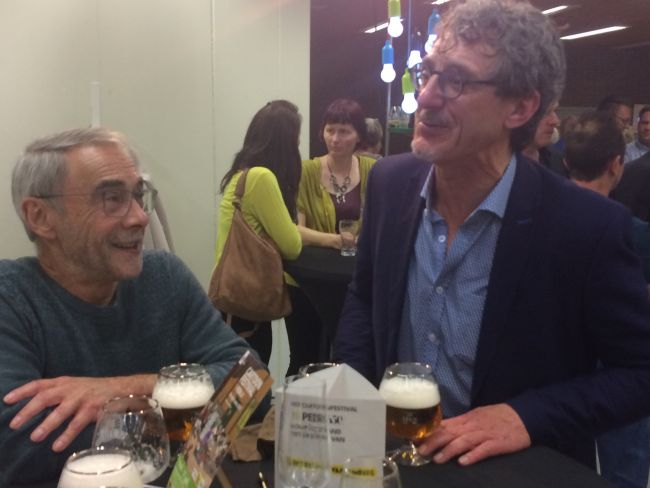 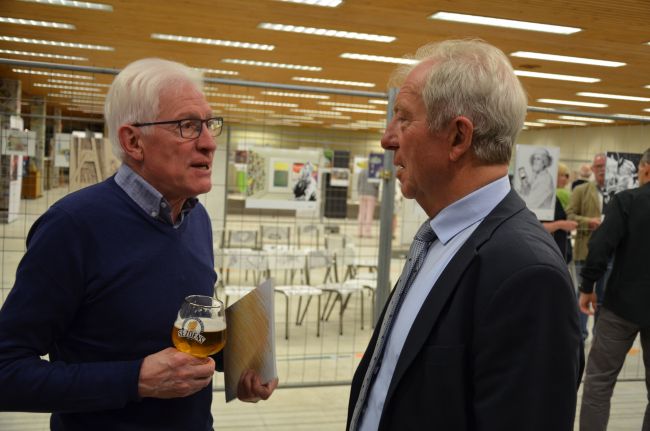 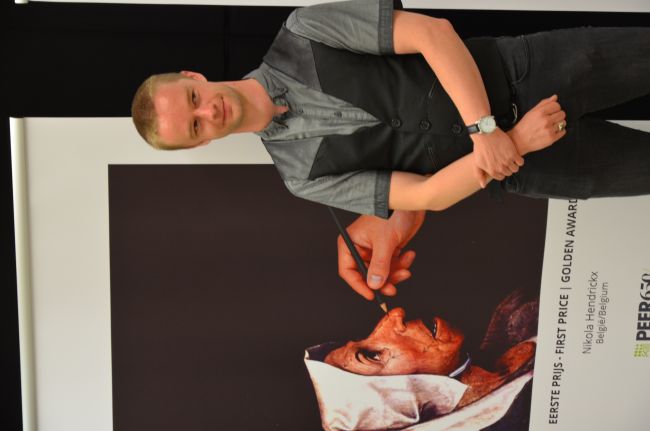 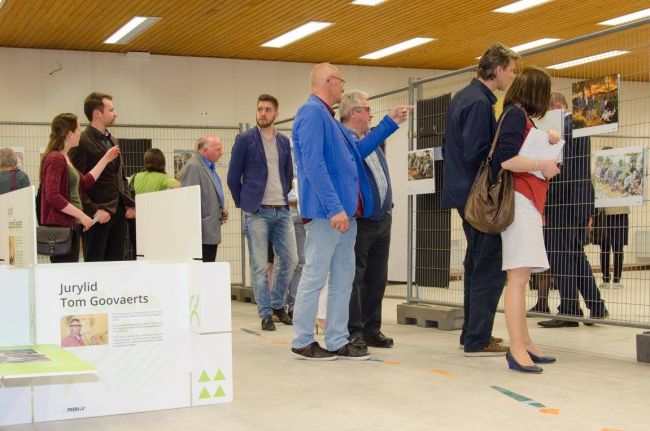 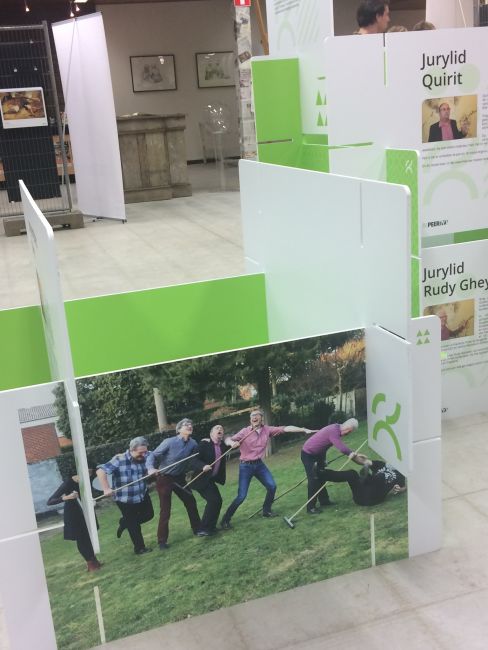 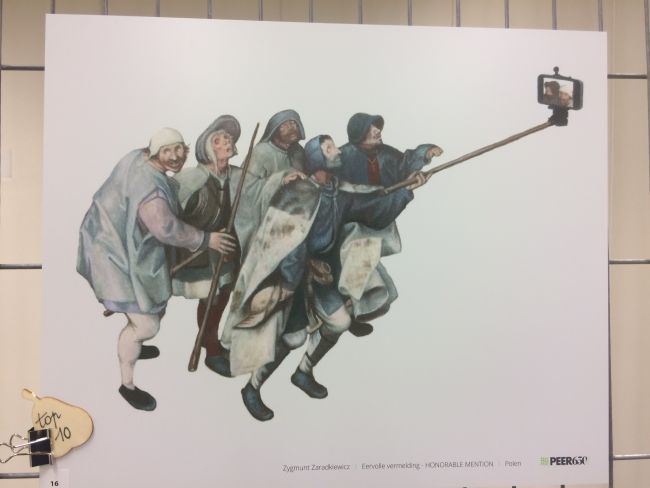 Yesterday I was at the opening ceremony of the Cartoonfestival 'Brueghel anno 2017' in Peer.

Peer acquired city rights in 1367 and so the city of Peer celebrates its  650th anniversary in 2017. One of the activities during the festive year is a cartoon contest about Pieter Brueghel The Elder. Brueghel was born in the 16th Century, in Grote-Brogel  , now a part of Peer, next to Bree (in Latin: Breda - that's way some think he is born there).

The organisers did not want to get bogged down in the past so they only had one question to the cartoonists: 'How would look a painting of Brueghel now, if he would live and work in Peer anno 2017?

An interesting, but difficult theme ... and yet 260 cartoonists from 55 countries were inspired by Brueghel's work.

During the opening ceremony some inaugurational speeches talked about the many parodies that were made of Brueghels work. And yet I wonder if 'Parody' is the right word for these cartoons.

Wikipedia tells me that Simon Dentith, defines parody as "any cultural practice which provides a relatively polemical allusive imitation of another cultural production or practice." Some say that a parody has the aim to make fun of the original art work by imitating it in a satirical way.

Well I did see, during the exhibition, very few cartoons that were mocking of Brueghels art works. Most of the cartoonists did respect style, the subject and the composition of Brueghels works. They just, as the contest described, brought it to the 21th century.

Perhaps we should call it a form of Pastiche. A pastiche is an artform where an artist makes an art work in the same style as the original one or by putting different art works together to one new art piece. Pastiche does not make fun of the original work, moreover it really has the intention to celebrate it.

But cartoons are fun no? I hear you thinking. Well let's say that most of the cartoons in the exhibition are Pastiches inspired by Brueghel's work, but due to the fact that it is transformed in to 2017, it gets a funny, satirical factor. Or it let us, at least, reflect on our society.

Oh by the way, it was IOA, Nikola Hendrickx who won the contest. Slawolir Makal (Poland) was 2nd and the 3th prize was for Sergey Sichenko (Israël).

We had a great evening and enjoyed the exhibition. You can still see it till the 31th of July in the beautiful Peer: www.peer.be