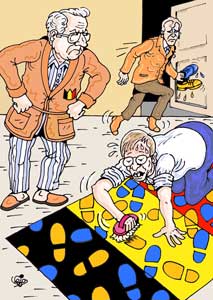 The Belgian governments Verhofstadt I and II were a source of inspiration for the Flemish cartoonists: the Nepal weapon trade, the spectacular escape from the prison of Dendermonde, the attitude of Belgium in the Iraq war, the one-liners of politicians meant for the Congolese leaders, the Sabena bankruptcy, the simplification of the administration, the gay marriage, Kyoto ...

Some 50 cartoons from among others Emiel De Bolle, BOB, Stef, Vejo … give a review of the Belgian political scene during the 8 last years: Louis Michel, Freya van Den Bossche, Karel de Gucht, Didier Reynders, Magda Aelvoet, Johan Vandelanotte, Laurette Onckelinx …, all these Belgian politicians are caricaturised in the exhibition from January 6th until March 16th 2008 in the European Cartoon Centre.