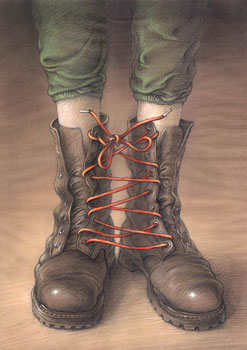 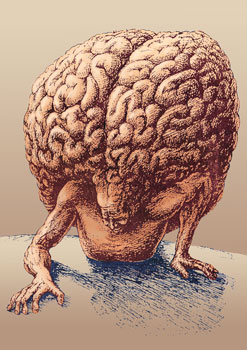 The ECC presents, during the autumn of 2009, an exhibition of the masterworks of Mikhail “Micha” Zlatkovsky, a top-ranking cartoonist. 120 of the most recent works will give you a critical image of our society.

In his cartoons Zlatkovsky pays a particular attention to problems such as poverty, globalization, environment and freedom of the press.

For good reasons he can be considered as a master in the visualization of ideas, values, love, sexuality and political concepts. Moreover, his sublime graphic style enforces the message and his cartoons are a reflection of his personality: originality en independence.

Zlatkovsky is already during 30 years at the top of the international cartoon events, he has won over 200 distinctions, about 50 of which grand and first prizes. In 1992 worldwide survey of cartoonists Zlatkovsky was voted the best by his peers.

He is an honorary member of the French Academy of Humoristic Art, of the International Academy of Education and of the Academy of Saint-Petersburg.

His original education was on the field of nuclear physics. He had been preparing for his Doctor of Science thesis, when in 1971, because of political reasons, he quit all his research and became artist/cartoonist. Almost immediately, he started participating in international cartoon competitions and soon became a familiar face on the cartoon world’s horizon. In the early nineties he lived in the United States, then moved back to Moscow, where he became a professor at Moscow State University and chief art director for a group of national magazines and newspapers.

Zlatkovsky is member of the Artist Union of the former USSR and the Russian Federation, the Union of Russian Journalists and the Graphic Artists Union of Moscow. He is currently working on a his Ph.D. thesis about the history of Russian cartooning. He is also the author of a large number of essays about art in general and cartoons in particular.

The exhibition of the most beautiful works of Mikhail Zlatkovsky can be visited in the European Cartoon Centre, every Sunday from 10 – 12 a.m. and 2 – 5 p.m., from September 20th until December 20th.