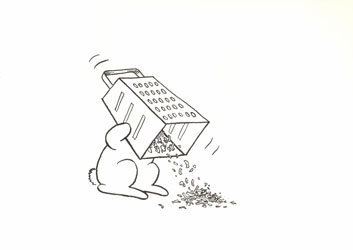 The ECC welcomes the “Bunny Suicides” for the next exhibition in spring. You certainly know these charming white rabbits in their creative attempts to end their lives using an unlikely variety of items. Revolving doors, a toaster, a cricket ball, a boomerang, a hand-grenade, the shining sun, a magnifying glass, smoking of several cigarettes… How simplicity can become humour.

The British cartoonist Andy Riley published his first rabbit cartoon book in 2003. And it was an incredible success! Since then one and a half million books were sold in 18 countries. In Great-Britain, Andy Riley is particularly known as scenario-writer of awarded comical series such as “Black Books”, “Little Britain” and “Smack the Pony”; he conquered the rest of the world with his Bunny Suicides. Riley drew a weekly strip in “The Observer Magazine” and also edited several cartoons books such as “Great Lies To Tell Small Kids”, “Loads More Lies To Tell Small Kids” , “DIY: Dentistry” and “Selfish Pigs”.

An interview with Andy Riley on Belgian television VRT (november 2009).