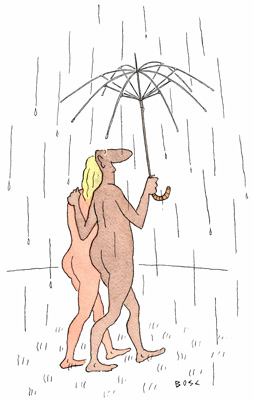 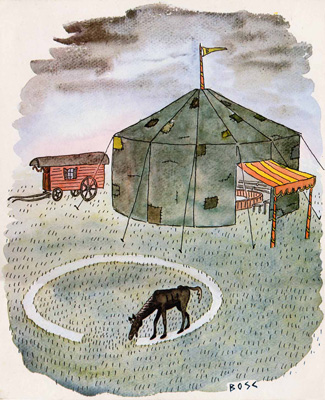 Jean-Maurice Bosc was born in Nîmes in 1924. In 1952 he discovered a book of humor signed Mose. He then spent all summer drawing in secret, and after a merciless choice of the best pieces that threw on the pyre more than 200 drawings, he set off to Paris with 49 cartoons under the arm and 2 weeks of survival money in his pocket.

He is 28, never studied in art schools but he wants to succeed at all costs and the combination of his talent, the craving to live and testify are so strong that pretty soon he finds himself among the best.

What characterizes the work of Bosc is the apparent economy of means. A columnist wrote that Bosc worked more with a rubber than with a pencil. He erases the superfluous to draw with his very particular line what is essential in an ocean of white. “The reason for my style, says Bosc, is that I do not know how to draw.”

In 1973, Bosc had published 8 cartoon albums in France and 13 albums abroad. He had been published in about 70 collective books of humor worldwide and we found him in around thirty magazines.

" What would you do if you could not make any more drawings? - I would marry a rich widow or stab myself with my pen. " After 25 years of wrestling against his disease, and the last 3 without being able to draw, Bosc planted his pen in his heart in Antibes on May 3rd, 1973.

You can visit the exhibition from 18th january till 5th april 2009 in the ECC in Kruishoutem, Belgium. Every sunday from 10 to 12am and 2 to 5pm.