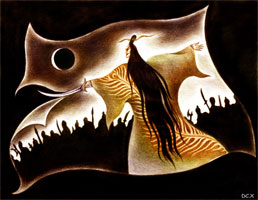 For 40 years Europalia is one of the most important cultural events of our country. This year Europalia devotes its activities to China and for the first time the cartoon art is on the program. The European Cartoon Center is therefore proud to present an exhibition on “China in Cartoons – 20 Chinese top cartoonists about a colourful China”.

Some of the best Chinese cartoonists are giving through the cartoon a particular view of the world. Each artist has his own contemporary technique, but their works are still influenced by the centuries- old Chinese culture. A real encounter between the actuality and the tradition. The 20 Chinese cartoonists of the exhibition are easing the distance between East and West.

The cartoon can be considered as a bridge between two cultures and it promotes the communication between people of the whole world and the mutual understanding.

The exhibition has been made up by the European Cartoon Center, the China Jiaxing International Cartoon Competition Organization Committee and the Chinese Artists Association Cartoon Committee.

It is an exhibition of high level proving that culture and art with a great A not only belong to the big city.

You can visit this exhibition from the 10th of January till the 28th of March 2010 in the European Cartoon Center Kruishoutem Belgium, every sunday from 10 to 12am and 2 to 5p.