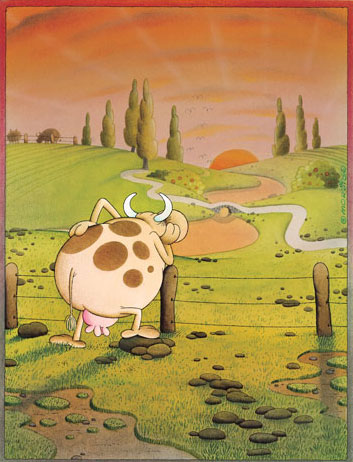 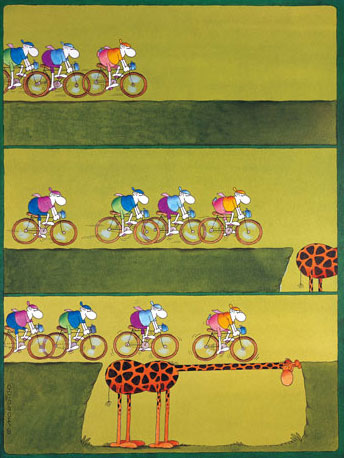 'HUMOUR IS THE TENDERNESS OF FEAR' Mordillo

Guillermo Mordillo was born in Buenos Aires in 1932 from Spanish immigrants. He studied design at the Journalist High School and worked for different movie studios and also as illustrator of children’s books.

At the age of 23 he left for Peru, later for New York where he worked intermittently for Paramount Pictures at the animations of “Popeye” and “Little Lulu”. He continued creating the humorous cards which were his livelihood when he arrived in Europe in 1963. He published his first cartoons in “Paris Match” and “Stern”.

He has illustrated fairytale books for children, designed advertising campaigns, created cartoons, designed greeting cards and sketched humorous pictures. Mordillo believes in the power of humour. A special quality typical of Mordillo is his love of sports. He follows them with great attention and sooner or later depicts them all, though he shows an undeniable preference for two of them: football, practiced by him with great joy as a boy, and golf, cultivated with the same satisfaction as an adult.

He gained a name for himself throughout the world as the creator of chubby men and round women, the only black and white elements in a very colourful environment that is strictly without words. From the outset his humour has always been marked by contrasts and opposites – austere black and white stands out against brilliant colours and a remarkable emptiness is juxtaposed against incredibly crowded places.

Whether in France, Germany or Japan, Mordillo’s visual creations are understood and appreciated just as they are in Italy and in South America. He won different prizes all over the world: the ‘Phénix de l’Humour’, ‘Best Cartoonist of the Year’, ‘Nakomari’, ‘Palme d’Or’, …

Mordillo will be present at the opening of his exhibition in the ECC on June 16th at 7 pm. The exhibition is open until September 30th, every Sunday from 10 to 12 am and from 2 to 5 pm in the European Cartoon Centre of Kruishoutem.