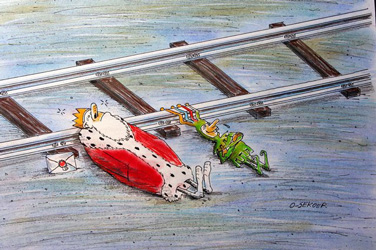 Luc Descheemaeker was born in 1955 in Bruges. He teaches ‘Art and Culture’ in the Sint-Jozefinstitute in Torhout. He makes cartoons and humor photos and won more than 100 international prizes. Hij tekent cartoons en maakt humorfoto’s en won meer dan 100 internationale prijzen. His pseudonym is O-SEKOER (on the French "au-secours" or the English "help").

O-SEKOER does not publish in newspapers or weeklies, nor does he do political cartoons. He chiefly draws with international cartoon festivals in mind. As such, he annually submits his work to some 30 major exhibitions worldwide. After a career that has spanned more than 2 decades, he is able to present a List of Achievements that is positively bulking with international success. Winning nominations, honorary mentions and first prizes from the most widely differing festivals as far as Japan, Bulgaria, Brazil, Turkey, Cuba and Spain.

O-SEKOER draws modern-day man in all his trivial and more soul searching depths. The humour thus effected, does not necessarily elicit massive roars of laughter among audiences. The reader observes, snickers, reflects, and comprehends ... O-SEKOER toys around with socially critical themes. His cartoons refer to what are most often emotional contradictions: poor man - rich man, the old versus the young, tall versus small, guilt versus innocence. Readily discernible and therefore very human feelings on topics such as death, loss, parting, suffering and distress, anxiety and apprehension, friendship and disaffection are the foundations that underpin his wit.

First off, he writes his cartoons, jotting down words that spring to mind and drafting rough sketches onto a scribbling pad. The humour he is after is laboured and fabricated, in the best possible sense of the word. It is well-reasoned in its composition. Through his cartoons, O-SEKOER attempts to poke fun at the world in a tone of irony and satire.

His humourous photographs too have amply tasted international success. On two occasions already, he has won the "Golden Lens" prize at the Knokke-Heist International Photo Festival. His pictures cause the viewer to feel uncertain as to what is real and what has been staged. Ostensibly they seem like photographed cartoons, thoughtfully composed and with great attention paid to detail, leaving the viewer to topple into an image that is disorientingly surreal. In this discipline too, he manages to strike a subtle balance between message and form, between content and style.

You can visit the exhibition from 18th january till 5th april 2009 in the ECC in Kruishoutem, Belgium. Every sunday from 10 to 12am and 2 to 5pm.