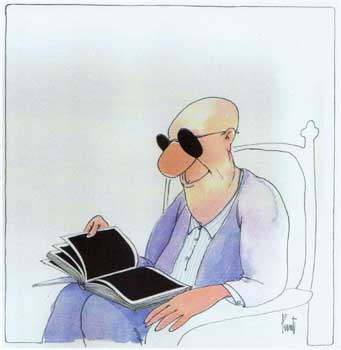 As a child he dreamt of an artistic career, he made his first oil painting on the wood of a cigar-box at the age of 6. But due to the war and also because his parents didn’t want him to follow the Art Academy, his life turned another way. After the school years, he went to work in a bakery, afterwards in a printing-office and finally as clerk in the notary’s office of his uncle. During all this time however his leisure activities were drawing and painting.

His first cartoon, signed Punt, was published in 1958. He took part in a lot of national and international cartoon contests. His pseudonym “Punt” is a point, the punctuation mark at the end of a sentence. And he used this “Punt” when he considered his work as finished.

He published a lot of cartoons for the Flemish television and for a lot of national organizations. Jan was not only a cartoonist, he could also surprise us with his paintings, assemblies and even poetry.