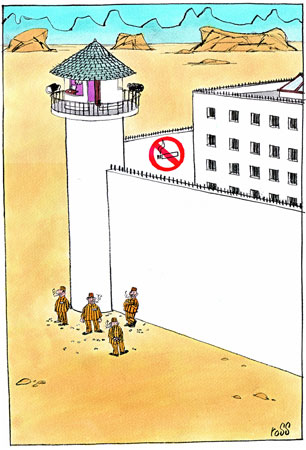 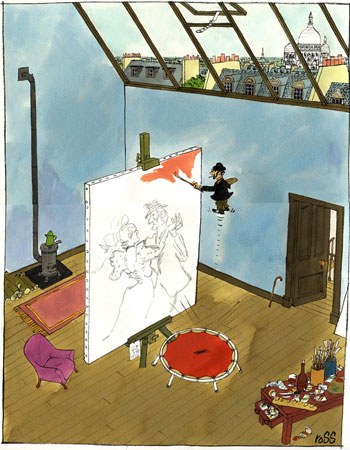 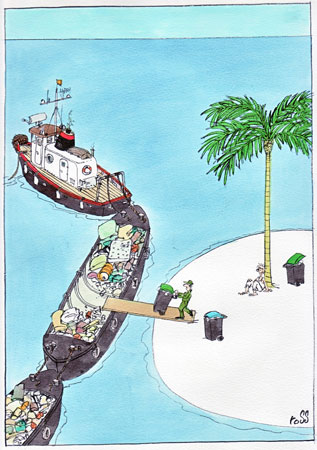 Ross Thomson was born in Scotland and is graduated in graphics at the Edinburgh College of Art. In 1962 he moved down to London and worked over 7 years as art director in various advertising agencies. During this time he sent some cartoons to the “Punch” magazine and much to his surprise he was accepted at the first attempt.

He left advertising and became a freelance cartoonist. His work appeared regularly in Punch, Reader’s Digest and Playboy and even he had a strip in Saturday edition of The Times.

He did the illustrations for campaigns of British Airways, British Caledonian Airways, Midland Bank and London Transport Buses and he was involved with the design of over 80 TV commercials. He wrote and illustrated numerous children’s books.

Regarding his entry into the world of international contests, his first attempts were in the early seventies, but because of the advertising campaigns he didn’t take part again until 1990 and has done since with reasonable success.

Ross and computers have never been easy bedfellows and so he is still drawing with Rowney S34 n° 0 brush and filling in with Dr Ph Martin’s water colors, hiding any mistakes with gouache.

Because of these contests, a new life emerged for Ross. He travelled the world, he saw some extraordinary places and made some great new friends.

Kruishoutem is one of the places Ross discovered. In 2001 he won the first prize of the Euro-kartoenale on the theme “The Supermarket” and he was second in 1999. In 2007 his work was honored with the best European entry. Last year he won the prize of the ECC, resulting in the personal exhibition you can admire the next months.

The exhibition can be admired at the European Cartoon Centre, Brugstraat s/n in Kruishoutem, every Sunday from 10 – 12 a.m. and 2 – 5 p.m., from April 8th until June 24th. Groups of 10 persons and more are also welcome by appointment on other days.