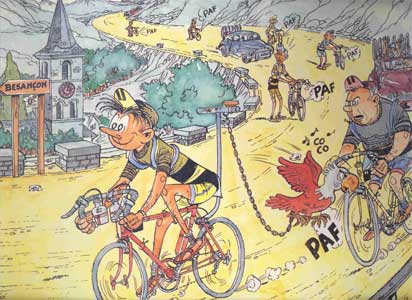 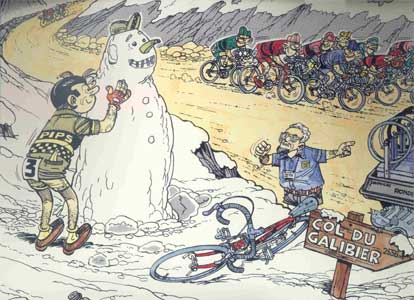 As the “Tour de France” passes this year in the region of Kruishoutem, the ECC has decided to give to this event a cultural note with an exhibition of “Thomas Pips” cartoons, drawn by Buth.

Leo De Budt (Buth) was born in Ghent in 1919. After his studies at the Saint Lucas academy in Ghent, he started to work for the newspaper “Vooruit” in 1936. He succeeded his teacher Frits van den Berghe and began to make his own comics. Especially the series “Thomas Pips” are famous.

The first “Thomas Pips” cartoon was published on February 7th 1946 in the newspaper “Het Volk”. 1947 is the beginning of the cycling adventures of Pips in the “Tour de France”, until 1982. This very popular cartoon was published daily in the sports pages of “Het Volk” and from 1962 in a special “Tour de France” newspaper, sold early in the evening and bringing each time a cartoon of the Tour. A little mouse was hidden in the drawings and trying to find it was very amusing for children and adults. The sale of the Tour de France paper amounted to 120.000 copies..