Every day he makes cartoons for the newspaper Het Laatste Nieuws – local edition – caricaturising the current events in Ghent. As friend of and in succession to Brasser, he draws for the weekly ‘t Pallieterke, from May 2002 till now. Furthermore he works as cartoonist for numerous companies and organizations such as Electrabel, Quickstep, Volvo Cars, the Belgian railways, trade unions,… 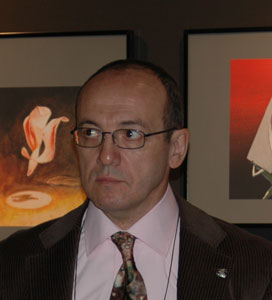 Since 1985 he has been involved in many illustrations and humoristic graphics. He also takes part in reviews and collective exhibitions in Italy and abroad. He won a lot of cartoon rewards, and in 2009 and 2011 he won the first prize in the Euro-Kartoenale Kruishoutem.

Gatto is one of the most successful cartoonists actually. His drawing may be considered as masterpieces.

"Through my training and my own view, I focus quite heavily on the pictorial and graphic appearance, sometimes at the expense of the idea or the humor of the cartoon. I will try to find a healthy balance between image and message." 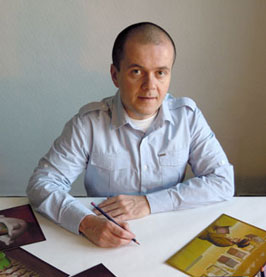 His surrealistic work is full of visual metaphors and black humor. He is very committed and hard in its political and social diagnostics. Among Pawel’s works, there are also purely humorous drawings and others based on playing with form, subtle, even poetic in their expression. 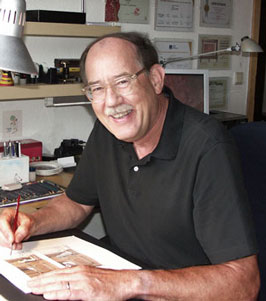 Pol Leurs was born in Luxembourg in 1947, and he is the father of three adult son. His career as an engineer has not prevented him from becoming one of the greatest cartoonists of his country. 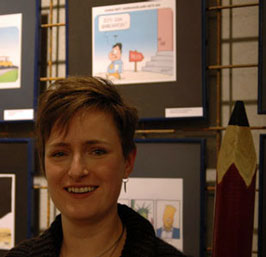 In the beginning she didn’t quite know what she wanted to do in life, but to be a cartoonist was not the first thing she had in mind. After secondary school she choose a typical female profession: nursing. After three years she got what they call a “decent” diploma and she knew everything about catheters, syringes and viruses. But it is wrong to think that Griet got there the drawing virus.

After the nursing studies she went to the Karel de Grote-Hogeschool in Antwerp to have a formation of publicity design. You may think this has nothing to do with cartoons. But André Nollet took her into the world of the drawings, a very difficult task because Griet hardly knew the possibilities of the pencil. But it’s dogged does it.

During eight years now Griet is combining enthusiastic her part time job at the hospital with the drawing activities. What’s more, the “new-comer” became our house cartoonist for 2012, and as she is a woman, a “pièce unique” in the world of cartoonists.

Nowadays Griet is drawing every day actual politic cartoons. But she is also busy in private and publicity drawings. 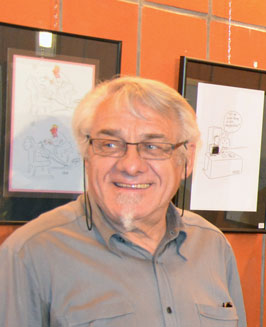 He was a teacher in special education, but is now retired. Today he still teaches at the Art Academies of Oud-Heverlee and Leuven, namely watercolor- and painting techniques and graphics.

He also draws (as Lejon) cartoons and caricatures. He has experience as a judge of cartoon competitions, f.e. in Antwerp, Olen and Lebbeke.

Leon is vice president of Feco Belgium and board member of the Flemish cartoonist organization Kever. He represents Kever in our jury.

"As a juror, I look primarily if the theme is shown in a humorous or satirical manner, and at the artistic drawing and painting techniques."